Once again, The Austin Writers Roulette spun another entertaining show full of spontaneity, serendipity and synchroncity.

Before the show officially began, host, Teresa Y. Roberson, circulated four of her paintings along with post-it notes among the audience. She requested that they look at each of the paintings, write the first thing that thought of and stick it to the cardboard that the paintings were mounted on.

Dana McBride opened the show, drumming out some “cooked” words inspired by spontaneity and synchroncity.

Magic Jack touched the romantic in all of us by sharing his tale about how ill-fated circumstances during a train trip to visit a friend ruined his intended vacation, but afforded him to meet his future wife. (She apparently has her version of their chance meeting, but didn’t care to share it.)

April Davis shared two vacation stories of her own. The first consisted of 8 stylish black and white photos on a poster board and the second was bound in one of her photobooks with a mesmerizing story she created from a trip to Illinois. 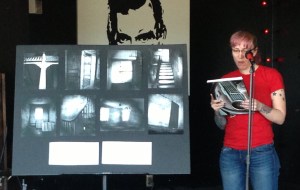 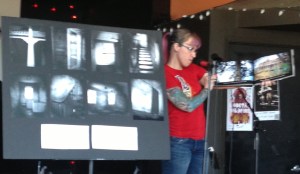 Awesmic City Cafe host, Anyah Dishon made her debut has a guitarist, singing about newfound love. Then followed with a nature poem about peace. 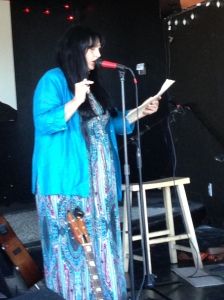 Our favorite anthropologist, Donna Dechen Birdwell, shared another story about her travels to Belize, which she said were “true, but not factual.” This latest edition was about how a man had encountered lightining and found religion.

Tbird launched us into her world where vivid characters and staccato onamonapia met, sprinkled with sexual innuendo seasoning.

Teresa Y. Roberson gathered her four paintings from the audience and read the spontaneous poems that she wrote about them, followed by the collected spontaneous comments that were attached to them.

Bringing the show to a close, Thom the World Poet threw a handful of plastic shaker eggs to the audience so they could improv music as he read a medley of theme-based poems. Thom invited musicians Magic Jack and Anyah on stage while musician Dana helped open the dance floor.

Afterwards, a few of us met up at a nearby restaurant and continued our free-flowing lively conversation.

Please join The Austin Writers Roulette on Sunday, April 14th when we conduct our cathartic “Spring Cleaning: Getting rid of bad jobs/habits/relationships!” 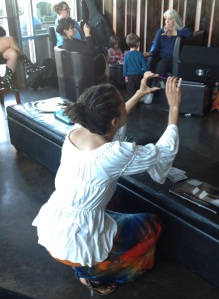 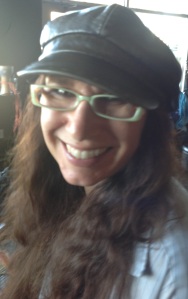 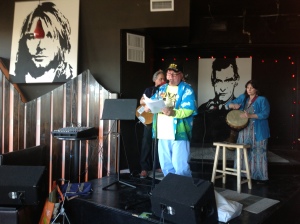 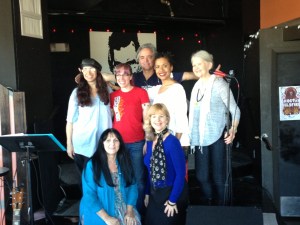 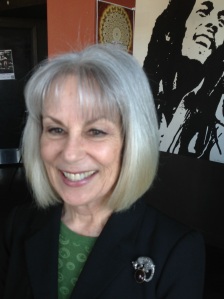